There is a new symbol of love, creativity, and happiness in Richmond Virginia and it is located on the store front of Tinker's on Westwood Avenue. Inspired by the Original Queen Bee of Angel Wing Artists, Colette Miller, we pay homage to her Global Angel Wing project that she founded in 2012. Her vision reminds us that we are all angels on this earth. Stop by, take your photograph, and make a memory with us in front of the two angel wing wall murals (one for adults and one for kids) by local artist (and one of our store managers) Kate Khalilian. Post your adventures on our new Instagram mural page here.

The store, which has been voted one of the Best Local Gift Shops, Best Places for Children's Gifts, Best Gift Wrap, Best Furniture Restoration Services, and most recently, one of the Best Retailers that has been in Business since 1988, has been a family business serving the community for 30 years. The restoration business was founded by Tony Coleman over 40 years ago, while his wife Sharon opened the specialty boutique 30 years ago.

Both located at 2409 Westwood Avenue, the store is known for bringing people together and inspiring people to make a difference. The restoration business specializes in storm, water, and fire damaged furniture and helps people through difficult times of loss. They literally bring new life to your most treasured items and help them survive another hundred years.

In 1998, the gift shop burned down after a candle caught fire. Just a wall away from thousands of lacquers, paint thinners, and other flammable supplies, there were no injuries nor any major explosions. The owners always believed that someone was looking out for them.

The shop has always been known for its transformations and today, October 12th, 2017, we are proud to introduce two new Angel Wing Murals by Kate Khalilian on the store front.

Khalilian, one of Tinker's co-managers, is an accomplished decorative painter and worked in Roanoke for 15 years. Her work can be seen in homes and businesses all over Roanoke, Blacksburg, and the surrounding areas, including the Patrick Henry Hotel, the Ponce DeLeon, and the Midpoint. With her colleague, Nene Roe, she restored a mural that was discovered under the curtains above the stage of the historic Grandin Theater and added the same motif to the ceiling beams. Her favorite little secret is that she painted her children's names on the ceiling.

She painted a 60 foot retaining wall of stamped concrete across the street from Virginia Tech. The concrete looked too much like Hokie stone and since it wasn't part of the university, they were hired to make it look like a different stone. From that job, they were later commissioned to paint bridges in Culpepper and Madison Virginia.

Married for 31 years, she and her husband have three grown kids in Roanoke, Chicago, and Harrisonburg. After their youngest son went off to JMU three years ago, her husband accepted a job promotion and they moved to Richmond.

"As a Co-Manager for Tinker's, I have the freedom to travel, visit my kids, and decorative paint on the side. I do gold leafing for the back [restoration business] and who wouldn't love to get paid to decorate for Christmas" says Khalilian.

At its core, Tinker's is about family and creativity. Tony Coleman's brother, Michael Coleman, is an award winning painter and has done the art restoration for the business for decades. Michael's son, Slash Coleman, is an accomplished painter, author, performer, and craftsman who helps out with the upholstery. Tony and Sharon have four children, all of whom have grown up and worked at the shop. Starting as summer jobs around the age of 13, each of them developed a passion for different sides of the business. Joey, the oldest son, has grown into being an extremely vital part of the restoration business. His wife and three kids have all worked/grown up there. Jeremiah and his wife worked in the boutique for years, but have since moved to Oregon to raise their 2 kids. These days, they find other ways to be involved and help out, such as sourcing new West Coast artists. Their youngest daughter, Alex, literally grew up in the shop. Her cradle was in the store, she used to climb on the counter, and when she was old enough, she brought her fun personality into the shop to work behind the counter.

Their youngest son, Joshua, lives in Los Angeles and is a costumer for big movies and television shows. Examples of his work include: 10 Marvel movies, Quentin Tarantino's The Hateful 8, Spielberg's Lincoln, the Grammys, Oscars and Emmy Awards. He sources new artists, shops the home decor markets, and helps market the business with his graphic design and photography projects. In fact, he is responsible for adding the special effects to the focal image of Kate and her wings in this blog. He also designed the stylish Tinker website.

"Tinker's is a place not just for artists, but for people that feel like they are creative in their hearts. I like people to come in the store and find inspiration. I love the fact that the stuff in my store brings someone happiness and gives them a great memory. When people come to the store, stand in front of the wings and have their photos taken, I love the fact that even the outside of our store makes people happy. It brings us all together and helps unite us all, like a family" states Sharon.

Stop by the shop, find some inspiration, snap some photos, and help keep a small store afloat. In a world of online shopping, Tinker's goal is to remind you of the magic of shopping IN a store. 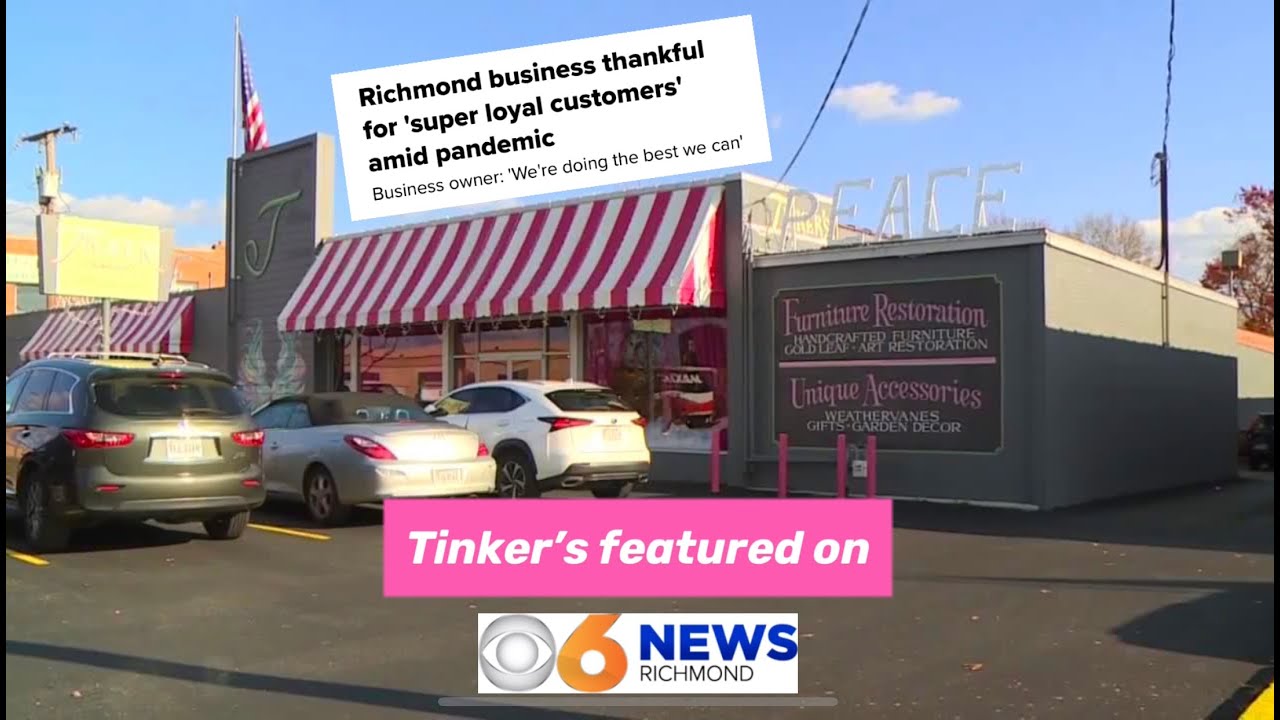 Best gifts to make you smile!